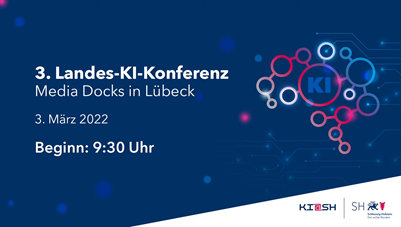 The 3rd AI-Conference is happening at Media Docks in Lübeck.

The possibility of value creation through AI applications is bigger than ever: especially in the field of energy, maritime technology, agriculture, medicine and many more. „Schleswig-Holstein is becoming a lighthouse when it comes to AI topics“ secretary of state Dirk Schrödter put it in a nutshell.

In his inspiring speech he underlines the outstanding role and strategy of Schleswig-Holstein.

In addition to this, prime minister Daniel Günther, Prof. Dr. Gabriele Gillessen-Kaesbach, Torsten Koß and Andreas Hennig participated in an interesting interview. Therin NAECO Blue is named by Andreas Hennig as „a promising startup to let the energy transmission happen“.

Together with the KI-Transfer-Hub Mr. Prange explained the supporet of FH Kiel to the AI-Ecosystem.

The speech of Ott Velsberg, Chief Data Officer of Estonia, reveals Germany as a country that has many approaches concerning AI, but it will be a long way for Germany to implement its ideas in various fields of technology. In contrast to a rather cautious startegy of Germany the more aggressive strategies of Estonia already pays off.

Another inspiring apeal is given by Dr. Vanessa Just in her speech about the startup scene in Germany. Therin she named different challenges which only can be solved when Germany moves forward to advance the development of AI and digitalization.

The conclusion of this conference was quite clear that Schleswig-Holstein wants to play a pioneering role in the field of artificial intelligence in various areas and is already doing so. Nevertheless, it also became clear in the workshops that there is not only a lack of employees but also a lack of know-how and opportunities for funding and access to the know-how of artificial intelligence, which is now being attacked.

We are pleased to be part of this ecosystem as NAECO Blue and to be able to continue to support initiatives such as the Gateway49 or the KI-Transfer Hub.

Let’s shape the energy industry of tomorrow and finally use renewable energy more efficiently and purposefully that not only here in the true north.

Live Stream of the event